Whiteboard: May it be so 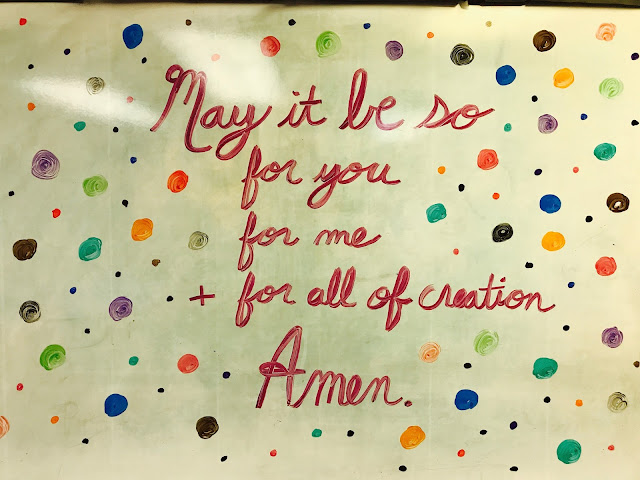 For seven full years now I've ended (almost) every sermon with those same words -- "May it be so, for you, for me, and for all of creation."

So it seems fitting that for my final Whiteboard drawing I'd use those same thirteen words.

This Sunday will be my final time in the pulpit as the Senior Minister at First Christian Church Scottsdale. In worship we'll be singing some of our favorite hymns, hearing some familiar words of scripture, laughing, crying, and celebrating the grace, mercy, and love of the Lord our God.

We'll also be participating in a Liturgy of Blessing and Release. It is a formal act that helps us close out our mutual ministry together with words of prayer, celebration, forgiveness, and thanksgiving. I hope you'll be able to join us, and I hope you'll stick around for the Luncheon that follows (Melissa Wise is catering the whole thing!).

It has been my honor to serve as your Senior Pastor for these last seven years. As Susan, Henry, and I move to Boston following her election as the President of the Unitarian Universalist Association we'll be going forth with hearts filled with love, thankfulness, and gratitude. Thank you, church!

Genesis 18:1-10a A Promise to Abraham and Sarah

The Lord appeared to Abraham by the oaks of Mamre, as he sat at the entrance of his tent in the heat of the day. He looked up and saw three men standing near him. When he saw them, he ran from the tent entrance to meet them, and bowed down to the ground. He said, ‘My lord, if I find favour with you, do not pass by your servant. Let a little water be brought, and wash your feet, and rest yourselves under the tree. Let me bring a little bread, that you may refresh yourselves, and after that you may pass on—since you have come to your servant.’

And Abraham hastened into the tent to Sarah, and said, ‘Make ready quickly three measures of choice flour, knead it, and make cakes.’ Abraham ran to the herd, and took a calf, tender and good, and gave it to the servant, who hastened to prepare it.Then he took curds and milk and the calf that he had prepared, and set it before them; and he stood by them under the tree while they ate.

They said to him, ‘Where is your wife Sarah?’

Then one said, ‘I will surely return to you in due season, and your wife Sarah shall have a son.’ And Sarah was listening at the tent entrance behind him.
Posted by Rev. Brian Frederick-Gray at 10:12 AM No comments: 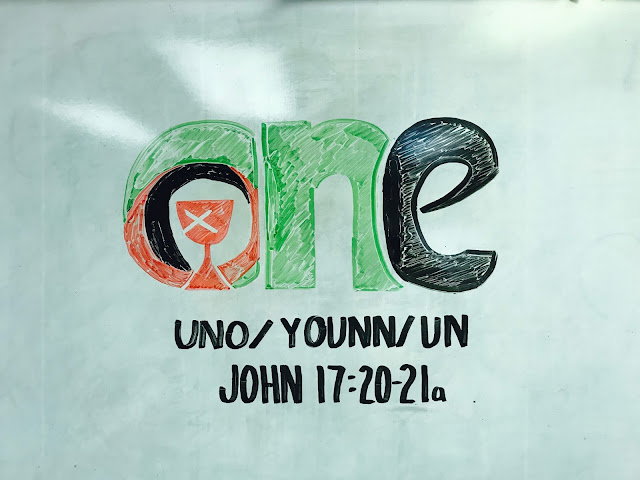 The Disciples General Assembly will be meeting in Indianapolis, IN from July 8-12.

So our Sunday morning worship service on July 9 will have a distinctly General Assembly feel to it!

I'll be preaching on the GA theme: One!

We'll be talking about what it means to be a part of a larger denomination, the important things that are happening at General Assembly (we are electing a new General Minister and President!), and how we can stay connected with the wider church.

Speaking of staying connected -- have you been to the General Assembly website? You can find the Full Docket online, along with all of the Business Items up for consideration. You can support the Special Mission Offerings and learn more about our Nominee for General Minister and President. Oh, and you can even live stream the Worship Services every single night!

After Jesus had spoken these words, he looked up to heaven and said, ‘Father, the hour has come; glorify your Son so that the Son may glorify you, since you have given him authority over all people, to give eternal life to all whom you have given him. And this is eternal life, that they may know you, the only true God, and Jesus Christ whom you have sent.I glorified you on earth by finishing the work that you gave me to do. So now, Father, glorify me in your own presence with the glory that I had in your presence before the world existed.

‘Righteous Father, the world does not know you, but I know you; and these know that you have sent me.
Posted by Rev. Brian Frederick-Gray at 11:16 AM No comments: