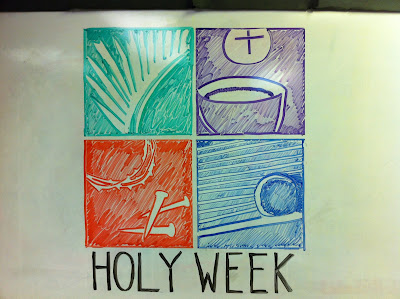 Maundy Thursday
Worship Service at 7PM in the Sanctuary
We will celebrate Christ instituting the Lord's Supper and will continue our worship with a candlelit service of the Last Words of Jesus.

Easter Sunday Worship at 10:15AM in the Sanctuary
Come join us as we celebrate the resurrection of our Lord and Savior Jesus Christ! We will amazing music (including a mini-orchestra and singing of the Hallelujah Chorus), a children's sermon, and a joyful celebration of our risen savior!
Posted by Rev. Brian Frederick-Gray at 2:19 PM No comments:

I have been participating in the SNAP Challenge this week.

And I’ve gotta tell you, it is hard.

SNAP stands for the Supplemental Nutrition Assistance Program, and it is more commonly known as “food stamps.”

The SNAP Challenge is a consciousness raising exercise, where for one whole week you have to live on the same food budget as those who receive SNAP Food Benefits. Which is to say, you are limited to a grand total of $29.43 per person to spend on food and beverages during the Challenge week. That translates to $4.20 per day, or $1.40 per meal if you avoid any snacks or extras (and you pretty much have to).

Like I said, it has been hard. It has also been eye opening.

I am fortunate that I have never had to worry about food. So it was a strange feeling to walk through the grocery store on Saturday evening buying my supplies for the week. For the first time in my life I was afraid I would not have enough food to eat.

In fact, shopping that evening was a startling experience. For one, it took me over an hour and a half to buy three small bags worth of groceries. It took so long because I had to walk up and down aisles pricing out different items before I could actually put anything in my grocery cart. I had to calculate “Do I have enough for fresh fruit and produce?” (yes, but not very much of them), “Can I afford a can of pinto beans or some yogurt to supplement my protein?” (no, I could not) and “How many meals can I get from a box of pasta?” (three, it turns out).

I also ended up having to purchase all sorts of items that I normally wouldn’t have bought simply because they were the least expensive items available. One of the reasons I am a vegetarian is because it forces me to be conscious of the food I eat and the things I put into my body. In general I try to avoid overly processed foods, particularly things with the dreaded “high-fructose corn syrup” in it. But not this week. Everything from a generic loaf of bread (marked down to $1), pasta sauce ($1.37), box of mac-n-cheese (69-cents), can of soup ($1.25), and even a can of peas (discounted to 59-cents) had high-fructose corn syrup added to it! Not only was I eating less food because of $29.43 limit (and I am, a lot less) but the food is significantly less nutritious as well.

Oh, and many of our church members who are participating in the SNAP Challenge have jokingly mentioned to me that they are vegetarians this week…because they couldn’t afford to purchase any meat.

It is amazing to think of food as a luxury item. When I realized late last night that I had enough food to get me through the week I was honestly ecstatic. Now that will require making a third meal out of that box of pasta that I mixed with a jar tomato sauce and it will require me to continue eating some semblance of an egg sandwich every day, and hoping that the little bit of cantaloupe I have left doesn’t rot. I’m going to make it through this week, but I can’t imagine having to live this way. We have brothers and sisters who are hungry, who are hurting, and who aren’t living on $29.43 as a consciousness raising exercise…but rather because that is all they have.

Time and time again in the scriptures Christ Jesus asks us what we are doing for the hungry and the poor and as I’m finishing up the SNAP Challenge I am more convinced than ever that the answer is: Not enough.

Yours in the Journey,
Rev. Brian
Posted by Rev. Brian Frederick-Gray at 12:14 PM No comments: 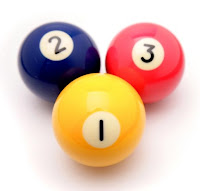 Administrative Council had their regularly scheduled meeting on Sunday March 17, 2013 right after worship. Here are "The Three Things" you need to know from that meeting:

Posted by Rev. Brian Frederick-Gray at 9:32 AM No comments:

We'll begin our observance of Holy Week this Sunday with a Palm/Passion Sunday Worship Service.

Why the "/" in the middle of our liturgical title? Well, because if you just go from Palm Sunday to Easter Sunday then it means you simply go from celebration to celebration -- The loud "Hosanna" of Palm Sunday followed immediately by the exultant "Hallelujah" of Easter -- which means we've completely skipped past an important part of the story. So we'll combine Palm Sunday and the story of Christ's Passion this week in worship. 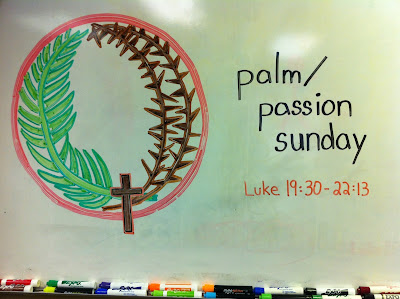 We will begin the service with the story of Christ's triumphant entry into Jerusalem from Luke 19:30-40. There will be a palm procession, loud shouts of "Hosanna" and a victorious chorus from the Chancel Choir.

From there excerpts from the Passion Narrative have been woven into our regular order of worship. Throughout the service we will hear once more and all over again about Christ's betrayal by Judas, his restless night of the soul in Gethsemane, his sham of a trial, and his death on the cross...all with the promise that the story does not end here.

As a people of faith we know that death does not get the final word. We know that the joy of new life and the power Christ's resurrection is waiting just around the corner on Easter Sunday. But we also know that in order to get to Easter's joy we need to first follow Christ all the way to the cross. So on Palm/Passion Sunday we do just that.

Posted by Rev. Brian Frederick-Gray at 4:15 PM No comments:

I'm back from Texas after my sister's wedding. The weather didn't cooperate as much as we would have liked, but it was a lovely event filled with family, friends, and the celebration of the marriage of Tracey Frederick and Kyle Cowan.

Here are a handful of pics from the Tracey and Kyle's Wedding Weekend (note: you can click on the picture to see the full-sized image)... 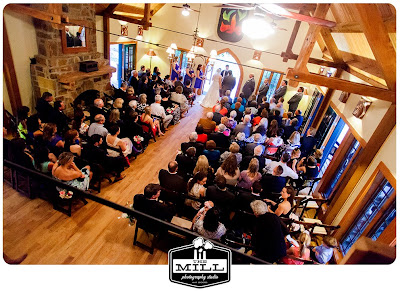 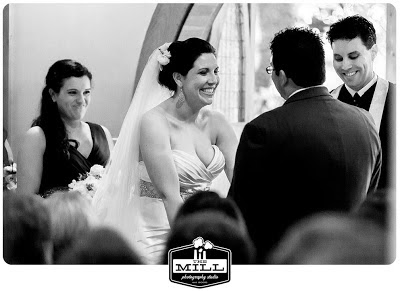 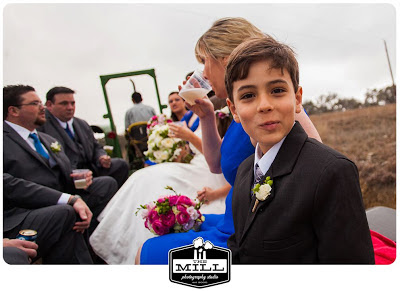 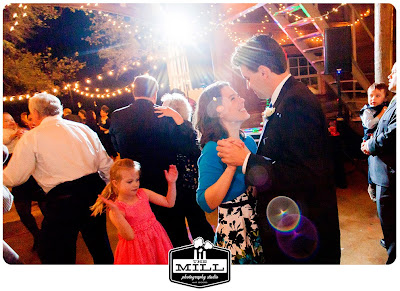 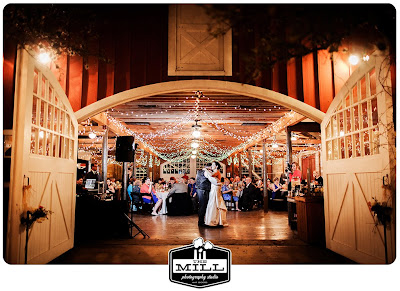 Posted by Rev. Brian Frederick-Gray at 10:49 AM No comments: 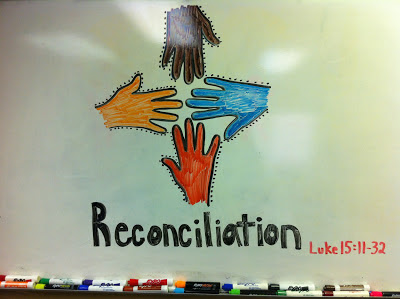 It is a story as familiar as it is shocking.

This Sunday in our Habits of Faith series we take on New Habits of Reconcilation, and we do so with the Parable of the Prodigal Son and His Brother.

Imagine it. The younger son walks up to his father and essentially says, "I wish you were dead...and I want to live my life as if that were the case." He wants his inheritance and he wants it now. In the first of many shocking twists in the story the father gives it to him. The younger son gathers everything he has, heads to a far away country, and squanders everything (property and all) doing all sorts of things that his dear old dad had raised him not to do.

He's broke and he's hungry and after he takes a job heaping slop for the pigs he realizes the error of his ways when he looks at that pig slop and thinks, "Boy, I wish I had some of that to eat." He remembers his father and the way his dear old dad used to treat his slaves -- they always had plenty to eat and even a little left over. The younger son decides he'll go back home and having wasted his birthright he'll just ask his dad for a job as one of his slaves.

Now, here is where our familiarity with the story gets in the way.

We skim past this first section. We don't have to take the "dissolute living" or "the severe famine" or even the slop-envying hunger of the younger son seriously because we already know how the story ends. In fact, we miss the startling nature of the way the son is received by the father because we're already at the end of the story where father and son are reconciled (though not so much with the brother) and the fatted calf is roasting and the dinner party is going on.

Just imagine that he didn't know the ending, though. Imagine that you were hearing the story for the very first time. A son has wasted his birthright, lost the property that still rightfully belongs to his father, and comes shuffling back home looking worse for wear than the boys from those Hangover movies.

How is his father supposed to respond?

How would you respond?

The story takes it most shocking turn when the father sees his son far off at a distance...and sprints out to him. The father won't even let his son get through his carefully prepared speech without interrupting him with the lavishness of his forgiveness. "Get the robe! Get the ring! Slaughter the fatted calf, we'll have a feast tonight! My son is home! He's not dead, he's home!"

It is a response so startling and unexpected that the older son can't even process it. "Isn't this the bum that just about ruined us? And you receive him with this kind of welcome and generosity?"

Yes. And Jesus says to us, and that is how it is with God's love too.
Posted by Rev. Brian Frederick-Gray at 10:39 AM No comments: 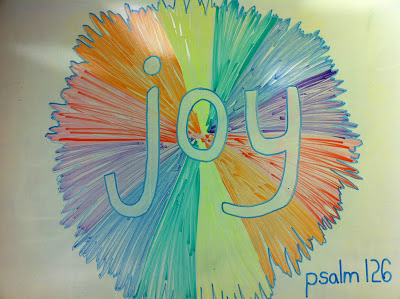 I will be out of the pulpit this Sunday.
I have the great honor of presiding at my sister’s wedding in Texas over the weekend, which means I will not be able to be with you all in worship on Sunday morning.
But don’t worry, we've got worship covered!
I’m happy to announce that our very own Ron Prast will be filling the pulpit this Sunday. He’ll be delivering a sermon entitled “Look for Miracles in Your Life” and knowing Ron I am sure it will be an inspirational (and I mean that in the truest sense of word, which literally means “Spirit-filled”) sermon that will touch your heart.
Each week during Lent we’ve built on our “Habits of Faith” worship series. Two Sundays ago we talked about Habits of Prayer. Last Sunday we talked about Habits of Repentance. How perfect is it that Ron Prast will be delivering the sermon on the Sunday we’ve designated for Habits of Joy! After all, Ron is one of the most joyful people I know!
I look forward to seeing you all when I get back in town. I’ll be away from March 7-12 and will be back in the office on Wednesday March 13.
Yours in the Journey,
Rev. Brian
Posted by Rev. Brian Frederick-Gray at 1:57 PM No comments: